We must act against landgrabbing

This week I was excited to be a guest of Moi Girls High School in Eldoret. Nearly 90 years old, Afrikaans speaking settlers from South Africa established the 109-acre school in 1928. It would take thirty-five years for the first African girl to be admitted. Today, 1,300 girls from all over Kenya study here. They walk in the footsteps of former girls Emma Too, Esther Murugi, Margaret Kamar, Ida Odinga and Tess Mudavadi among others.

Conservatively, these schools educate over 200,000 girls and boys from low income communities. Between 30-60% of the citizens in these counties live below the poverty line. In Uasin Gishu county alone, these titles safeguard 300 acres.

Who could have imagined that the courage and tears of Lang’ata road primary school students in January 2015 would catalyse a nation to act? Following the Presidential directive three days after the reclamation of Lang’ata, 10,000 school head-teachers applied for title-deeds. A coalition of civic organisations formed the ShuleYangu Alliance.

The Lands Ministry and National Land Commission established the Rapid Response Surveying Task-force. The Institution of Surveyors of Kenya have now offered the services of professional surveyors to assist. Behind the smiles and joy of head-teachers is the patience and patriotism of many Kenyans who worked to make that moment happen.

Speaking to some of the head-teachers at the ceremony presided over by Lands Cabinet Secretary and National Lands Commission Chairperson, I asked them, what does a title mean for your school? The responses were similar. Titling my school safeguards the right to education and keeps our children safe from outsiders. It ensures we protect poor families from the higher costs in private schools. It keeps open, access to play grounds. It means we do not have to deal with threats and intimidation by land-grabbers or their lawyers. Their comments confirm our research findings in 2015 and 2016.

The awards need to be understood in a broader context. Kenya faces an epic rush for public land, an epidemic, the Lands Cabinet Secretary is fond of saying. For the last six years, state officials and private business-people have actively undermined the moratorium on the transfer of public assets during the transition to devolution. Today, public silence, corruption and the collusion of public officials is at the heart of the problem.

While in Eldoret, I heard the tragic-comic story of a judge who awarded a land-grabber the very land his court was sitting on without even knowing what he had done. Every time a school-child sees their playground being grabbed and the land-grabber goes from rags to riches, we sow the seeds of future adults who will have no respect for public land. Too many of us are like that bitten hyena who, noticing his own blood, turns and tries to eat its leg. Titles are not just papers; they are the basis of ownership.

Administrative delays implementing Presidents’ directive has led to countless demonstrations, wall demolitions, occupations, legal injunctions and media coverage. If state officials did their jobs, there would be no need for this activism, Boniface Mwangi is fond of saying. Children Government leader Fidelia Uzoamaka put even more passionately, “Do you see my size? This size is for studying and not pulling down walls.”

So, what is next for the growing movement of public land defenders in schools, civil society organisations, government and business offices? All head-teachers could hold title receiving ceremonies for their school communities and build permanent walls or fences to secure their school boundaries. Other head-teachers must demand their titles and invite the rapid results task-force to survey their schools. County Governments can stop issuing building approvals to private developers for public land.

We can all blow the whistle on land-grabbing. We can protect all the community leaders, teachers and public land defenders like Stephen Mbinu, Hamisi Mwelu, Sister Mary Kileen, Francis Mwangi who daily stand up against powerful land-grabbers.

Active citizens working with responsive Government offices makes a transformative difference. However, 1,000 titles are still only a 10% of the applications before the National Land Commission and only 3.5% of the schools still without titles. Until all our schools are titled and collectively owned by their school communities, our children and the future of public education are not safe.

Two questions remain for us to ask. Ask your local public school head-teacher, “Do you have your title?” Mr President, did the primary schools of Lang’ata road, Naka and Mwamdudu also get their titles? Are all the Nation’s schools safe? 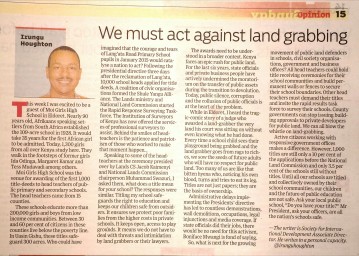