The abrupt announcement of Moi Day as a public holiday this year left the nation deeply conflicted. The former President’s followers celebrated, constitutionalists groaned and the majority simply enjoyed the day off work and school. Wednesday was frankly, awkward. Coming barely ten days before Mashujaa, perhaps we could spend a moment reflecting on the purpose of our national days.

Justice George Odunga caught the Executive napping a year ago. Seven years after we had voted for which national holidays we wanted to celebrate, two successive administrations had failed to update our Public Holidays Act. One year on, the Act still hadn’t been amended.

However, Odunga’s reasoning is not beyond fault either. A more judicious position would have been to have rendered any Act of Parliament that was not in harmony with the constitution invalid and void. Both actions and inactions has confused the country and cost our economy millions.

National days matter politically and economically. Internationally, countries celebrate specific days to symbolize significant historic moments, religious events and iconic leaders. Freedom from colonialism and oppression are the purpose of most non-religious public holidays globally. The Nepalese (36), Indians (21) and Filippinos (18) have the most public holidays in the world.

It is not only in Kenya that we have days of national awkwardness. Americans and the Spanish annually argue that Columbus Day in America and Spain celebrates the genocide of indigenous peoples.

Unless used to drive consumerism and tourism, public holidays cost economies. The United Kingdom for instance, loses over 2 trillion shillings annually, the equivalent of two thirds of the Kenyan Government’s current budget, as a result of its holidays. Schedule 5 of our constitution provides for twelve public holidays. Our Labor Act also guarantees most workers 21 days off a year. Each of these days cost the economy millions.

There are other reasons why we need to go beyond our personal joy with Wednesday’s day off to challenge our public conscience. Simply, Moi did not provide Kenya with its finest leadership. Hundreds of families of those that died and those that survived the torture, detention without trial and state executions will tell you Moi days were not happy days. His successor Mwai Kibaki famously stated at his inauguration, “I have inherited a country that has been ravaged by years of misrule”.

Regardless where we each stand on former President Moi’s role in our history, we must all face an inconvenient truth, most of us don’t know what to do with national holidays anymore. Stripped of state organised festivities, children and parents stayed home, shops closed and some rushed upcountry to check on relatives. Those that took the day off, didn’t know how to celebrate the day beyond a few social media posts and uncomfortable jokes. None of this greatly honored Moi or deepened our sense of a nation with national values.

We set aside October 20 as Mashujaa day to combine Kenyatta and Moi days. In voting for this day, we chose also to include all the heroes and heroines who have sacrificed for a free, dignified and safe Kenya.

Let’s set aside the pretense this year and get creative this year. Let’s spend the day really honoring the fallen and those who continue to stand up for those that cannot. Could we invite a police-officer, a military veteran, human rights defender, a para-medic or another favorite hero to lunch and listen to them tell stories of courage? How about we plant a tree for a hero and read a history book to the young?

Perhaps the national museums and monuments could offer free access for the day. Perhaps we should organize a movie day in Uhuru Park. Taking a cue from our national poet Aleya Kassam, could we organize a viewing of award-winning movies Super Modo, Watu Wote, 18 hours, Silas or Rafiki among others?

Public holidays may be popular, but popularity does not always have purpose. Let’s bring some purpose to Mashujaa day this year and profoundly celebrate our heroes and heroines. 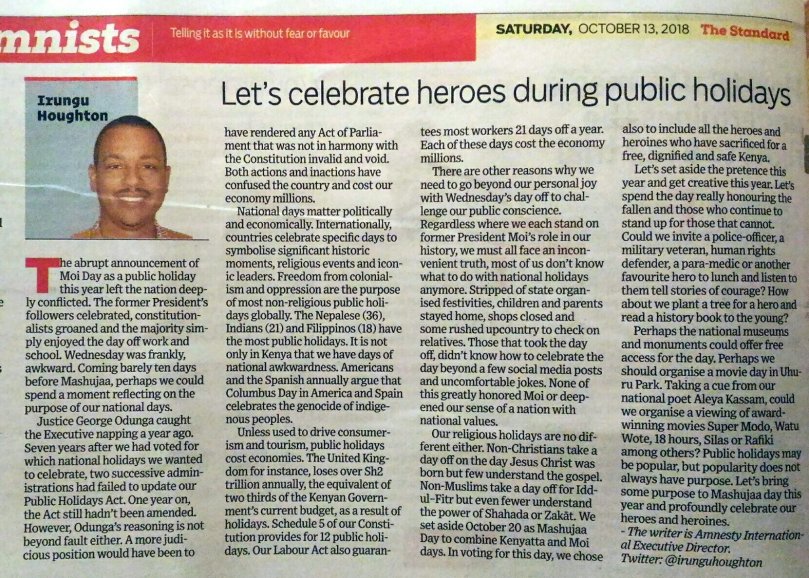 A redacted version of this piece was published in Saturday Standard, October 13, 2018.